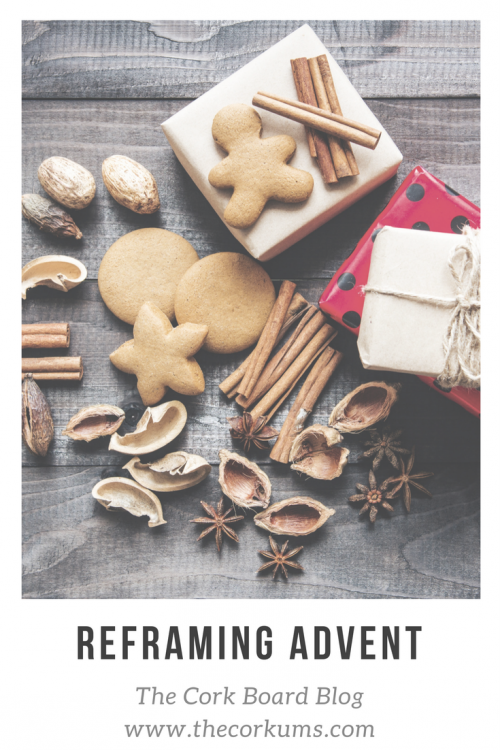 Nothing says I’m waiting for the arrival of a Savior like:

If you love anyone of the aforementioned traditions, more power to you. I’ve been in that season, and it was so fun and joyful and enjoyable. And I may cycle back to it again.

But the fact of the matter is that I have felt absolutely zero motivation to do any of the traditional Christmas preparations this year. We have no tree, no lights, no candles. I have wrapped exactly zero presents, addressed zero Christmas cards, and baked zero cookies.

Instead I’ve been slapped in the face repeatedly with the reality that our family is broken. That I’m a sinful human. That I trigger the trauma of my children. That I’m insufficient. And that life doesn’t stop for any “special” season. People still get sick, meltdown (this even MORE than normal), and need surgery. Neither special dietary restrictions nor trauma take a vacation during Advent.

And, I’m not the only one feeling like a Scrooge. Multiple mom’s have confessed their guilt to me this year about skipping a typical family tradition or just deciding to do less than the cultural average.

I wish a had pulled these thoughts together sooner for them because, “out of the whole Christian year one season that is especially fitting for liturgical lament is the season of Advent.”

I’m also pretty sure Jesus wouldn’t even want us feeling guilty about neglecting the traditions that are specifically designed “for him.” The nativities, the Jesse tree, the Advent wreath, etc. Again, I’m not knocking them, but I want you to feel released from the guilt. We can still point our children to Jesus and even instill the importance of his birth in a myriad of other ways and even …gasp… during other times of the year. No one is a failure if their kids don’t hear Luke chapter 2 during December.

I’m going out on a limb and claiming that Jesus will understand if you lament this year and just lay in the fetal position in a bedroom (next to a bathroom without Christmas hand towels, down the hall from a treeless living room, in a house without a single exterior light) and wish he would come sooner rather than later.

I’m betting that He’ll meet you in that space with a quiet reminder that He did come and gift us with Hope and the Holy Spirit, and He will back.

However you are waiting for Jesus this year, I wish you a Merry and Guilt-free Christmas!