The main philosophy of education we’re implementing in the education of our children is classical. In the first stage of learning, usually referred to as the grammar stage, students are gaining the facts and vocabulary needed to analyze a subject more deeply. We do this mainly through memory work. Sometimes when I chat with families, they doubt that this will work for their child. The cool thing about memory is that it’s like a muscle–the more you work it, the stronger it gets. Also, families often underestimate their children’s ability to memorize. Some need to work at it a little harder than others, but think about activities that children do successfully every day–brushing teeth, buckling a car seat, singing the ABC’s, naming all the characters in a favorite television program–they all require memorization. Of our three youngest children, we ended up with an auditory learner with a naturally strong memory, a visual learner who had to work hard to strengthen her memory, and a kinesthetic learner with special needs. Classical education–namely the grammar stage–has served them all well, so I wanted to share their stories of how we’ve made it work for each of them. 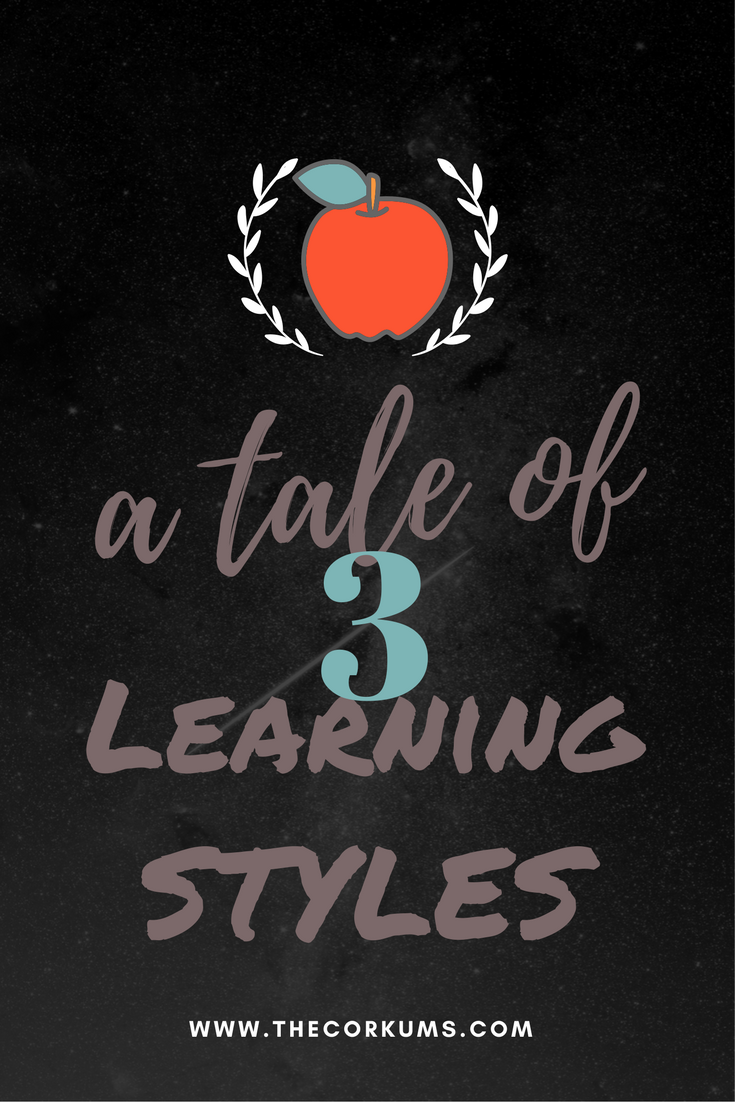 From the beginning, we’ve always had a tune (some catchier than others) for each piece of memory work. We’ve memorized skip counting of numbers, science facts, history facts, Latin vocabulary and grammar, locations for geography, Bible verses, an extensive timeline, and English grammar. My auditory learner could study using an mp3 player with headphones or in the car while we drove.

This is the child who I was worried about because she could never remember our phone number. However, we always practiced in the car where I would say it and have her repeat it. One day, she saw it written on our white board and memorized it on the spot and never looked back. I’m embarrassed it took me that long to figure out because, much like me, if she doesn’t see it, it doesn’t happen in her world. Our memory work songs were only helpful to her as reinforcement after she had read and re-read the memory work. Visual learners may also benefit from copying the memory work. Additionally, visual representations of certain memory work–creating charts or color-coding it–can be great tools. Our visual learner is a great example of how memory can be developed. She struggled early on and seemed generally clueless about the memory work. Memory Master which came naturally to our auditory learner seemed an insurmountable goal for our visual learner. However, she was diligent, and by the time she was 9ish, she was totally owning her own memory work and retaining exponentially more and more. Now her memorization skills could put most people to shame.

While I think all learning experiences are more robust with an experiencial or kinesthetic piece, some students can only learn if this piece is in place. We ended up with one of these, too. He’s the kid who has to jump each letter of his spelling words out on a trampoline and has to experience something concretely to really understand it. A verbal explanation or even a diagram aren’t good enough. He has to experience and feel it. He takes in memory best when singing and listening to the song while seeing it written down and doing matching hand motions. Then he doesn’t understand the words until you can stand on the “X” where JFK was shot or walk the battlefields of the Civil War.

Despite all of their differences (including one who has documented brain abnormalities), they have all found their niche in how to memorize their memory work. They’ve committed a ridiculous amount of information to memory, and we’re watching how our now Logic and Rhetoric stage students are able to use that knowledge as the foundation of their education as they add strong analytical and communication skills to their repertoire.

If you use memory work in your homeschool, what works for your students?