The segment starts with a recap of the story of Hannah Williams. While the Williams’ treatment of Hannah is in no way excusable, I have a sense of empathy for them that possibly only the parent of a traumatized teen may understand. Raising kids from trauma has tested my self-restraint and anger-management skills more than any other experience of my life. We have been in the horrible downward spiral that punitive actions toward trauma kids triggers. I fully understand how parents without the correct tools and support could end up where the Williams ended up.

The majority of the story focused on children of a Richard and Julia who allegedly have 28 children, many adopted from Ethiopia. All the clips of Julia seem to be taken from previous news stories run on the family. Her side of the story is not represented by Dan Rather at all. While I have concerns about how a family can possibly care for that many kids from hard places well, I also am skeptical of the sob story painted by Rather through interviews with a couple of the older children.

One of the older girls, Belanesh, starts by telling how she just wanted to have “parents and someone to be a mother-figure.” Our kids have voiced similar laments. However, it turns out they thought mothers were supposed to give them whatever they wanted and to otherwise leave them alone. Most of the time when I am doing typical mother things like assigning chores, requiring politeness (e.g. please and thank you), or giving advice, I get push back that I am making them “slave dogs,” am obsessed with “please,” or aren’t their priest or doctor. If we do anything less than give them everything they want all the time and ignore all misbehavior, they claim we don’t love them or want them.

One of our kids thinks that turning 18 means you can still live at home but do whatever you want because you’ll be an adult and no one can tell you what to do. When we try to communicate a conditional, “If you cannot follow certain basic rules such as be kind to others, then we will need to ask you to live somewhere else at 18,” it is immediately interpreted as, “I knew you want kick me out at 18. I knew you not want me and no one will ever love me.”

Eventually, Rather turns to Abiy who had a run-in with police after being accused of having sex with an adopted sister. He defends himself by saying he didn’t have sex, only touched her behind and breasts. Is that really supposed to be a defense? With trauma kids, it’s common for them to never be able to accept responsibility for their actions. We see this daily in our house. While Julia’s accusation may have been exaggerated to the point of untruth, she still had a valid reason wanting her son to leave the home.

If Julia did, in fact, slap her children around while Richard was holding them down, they should definitely be held accountable. However, I also know that perception is not reality in our home. “How could someone misperceive something that seems so cut and dry?” you may ask. Four letters. PTSD.

Playing Devil’s Advocate with the side that Dan Rather portrayed does not mean there aren’t valid concerns to address in this situation. However, the point is that there are multiple sides to every story, and our experience with older kids from Ethiopia causes us to watch stories like this with very different eyes than the general public. I am sad for Abiy and Belanesh, but could sense how they set out to emotionally manipulate the pastor interviewed and eventually the viewers. It’s a maladaptive behavior we are all too familiar with.

Bottom Line: I hope you will watch stories about adoption with an open and critical mind and dig to find ALL sides of the story. 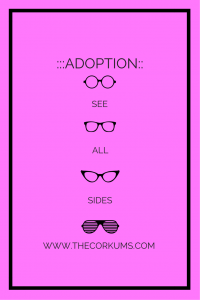 Posted in Adoption and Orphan Care, Uncategorized and tagged news, Our Adoption Adventure.