For various reasons, the three older kids are not living at home. One wants to return, the other two are desperately trying to find their wings so that they can fly the nest for good. With more mental margin than I’ve had in years, I’ve been reflecting over our experience of adopting older kids and what I would have done differently. 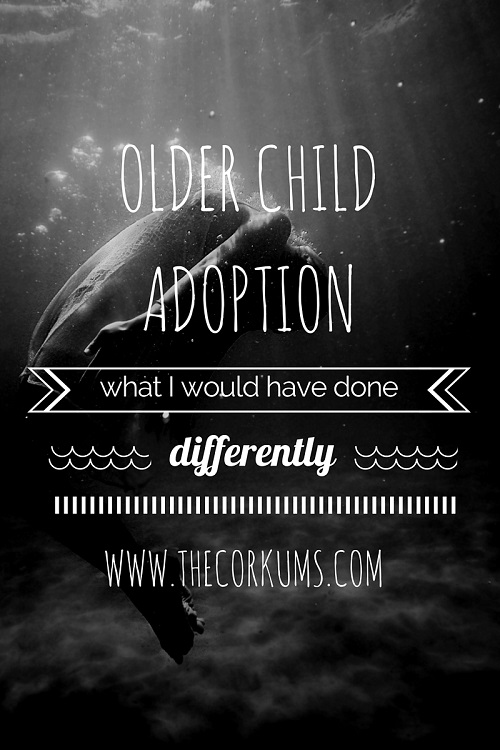 I would have reacted less and prayed more. Fear often caused me to take a present conflict and play its worst possible scenario to completion in the future. My imagination made me frantic. In hindsight, the things that threw me off my rocker 3 years ago were not as dramatic as they felt at the time, but we tend to be fixers. When two of the kids weren’t on talking terms, we sat them down and cajoled and explained and lectured and cajoled some more into putting their differences aside. We desperately wanted them to heed our parental words of wisdom. What a waste of time. In their world, parents didn’t have the right to meddle in such things, and we certainly hadn’t earned the right to be heard. They worked it out in God’s and their own time…not ours. If it happened now, I would address it but much more succinctly and without all the expectations.

Speaking of which, I would have had lower expectations and more radical acceptance. I would not be so hurt when we went out of our way to love a kid well, and it was either rejected or radically underappreciated. I would expect the restlessness that causes a child who has been excited about an event for months to ask 15 minutes into it to go home. I wouldn’t have ruined so many events for myself trying to get them to engage. I would’ve made my invitation and left it hanging without the coaxing and deal making and threats of consequences. I also would have more acceptance about how drastically trauma affects a person’s ability to learn.

Lower expectations also would have helped me realize earlier how much time adjustment can take. We’re talking years, people, not weeks or months. Maybe even double digit years. I kind of chuckle when I read posts from families that read, “My child does xyz still! We’ve been home for 6 months!!”

I would have come to terms with the nature of their attachment disorder sooner and taken their rejections of me less personally. It doesn’t matter than I’m capable of teaching students how to read, they are incapable of learning from me because of their hypervigilance around a primary attachment figure. Heck, they may be incapable of being around me for longer than minutes at a time let alone learning. Recognizing their skittishness and the reasons behind it may have caused me to tread a little lighter relationally than expecting them to accept my cultural expectation of how I should be able to interact with them or how I can relate to my neurotypical kids.

I would have dug deeper for more patience to let them learn lessons about their world view the hard way. I would not have expected them to take our word for anything. In their eyes, only doctors have the right to give health advice, only pastors give spiritual advice, only “real” teachers correct grammar, and parents leave you alone unless they are giving you something or doing something for you. Still want to mail $60 in cash after an admonition not to? Sure. Want to ignore rules about capitalization and assume your job application will always be accepted? Sure. Want to try that tone of voice with a boss? Sure. Want to assume someone will always read for you? Sure. Want to waste your money buying fast food because you assume your institutional food is worse than the next college kid? Sure.

Lastly, on a really pragmatic level, I would have done neuropsych testing earlier and pushed for as many diagnoses as possible. I know this subject can be controversial, so you can take or leave this one. We started starry-eyed and optimistic and a little anti-diagnosis. After all, trauma causes symptoms that look like a dozen alphabet soup diagnoses AND once their trauma was dealt with, the other behavioral and mental symptoms would resolve AND their testing wouldn’t necessarily define their potential AND, AND, AND. I get it. But you know what? Regardless of the fact that a 13-year-old may not be catching up quickly due to anxiety due to attachment issues, or a 15-year-old is socially awkward due to cultural and language barriers, they still need services to address the current state of affairs. And services are only available to kids with diagnoses…and specific diagnoses at that. In our state RAD, PTSD, generalized anxiety, and ELL don’t count, but Autism (anywhere on the spectrum) does. Explaining away a reading level deficit of over a half dozen years because of “lack of exposure” will not get her caught up, but a cognitive learning impairment diagnosis might. Honestly, play the system. Don’t get too wrapped up into your child’s identity and a diagnosis. The diagnosis does not redefine who your child is, but it is the path to help. Until there are services that actually meet our kids from hard places where they are, we need to do the best we can do get help with what is available. You need to baseline test them as soon as possible once they’re home, and then do follow up testing a year or two later to nail down a diagnosis. With older kids, you do not have the luxury of waiting to see what happens, because by the time you wait out the generally accepted 3 to 5 years to adjust and assimilate a new language, they will be 18+, and you will not longer be able to get them the help they need.

If you’ve adopted older kids, what would you have done differently?