One of the biggest misnomers for parents when they first encounter trust-based or connected parenting is that it seems like there are no consequences. It feels too permissive. This is actually the reason I tossed the Connected Child aside after reading it pre-placement. Honestly? It made me want to gag.

Then we attempted to parent a child from a hard place with traditional, cause-effect parenting. Guess who went to go dig that book out? You’ll do anything out of desperation, right?

I was shocked when the few tools we dabbled with worked. It didn’t take long before we were all in.

While there are still consequences in our house, we do our best to eliminate, what I’ll name for the sake of argument, punishments.

A [kon-si-kwens] is the effect, result, or outcome of something occurring earlier.[1]

If my child is mouthy or rude or makes some other myriad of poor choices, there will be a consequence. It may be a re-do or a time-in or a simple verbal correction. However, I won’t punish mouthiness by withholding an activity or privilege. The goal is to help our kids feel safe and develop better skills. A traditional punishment will put a Band-Aid on a gaping wound at best or further escalate a situation to violence and aggression at worst. I don’t know about you, but I don’t really want to be anywhere on that scale of “success.” 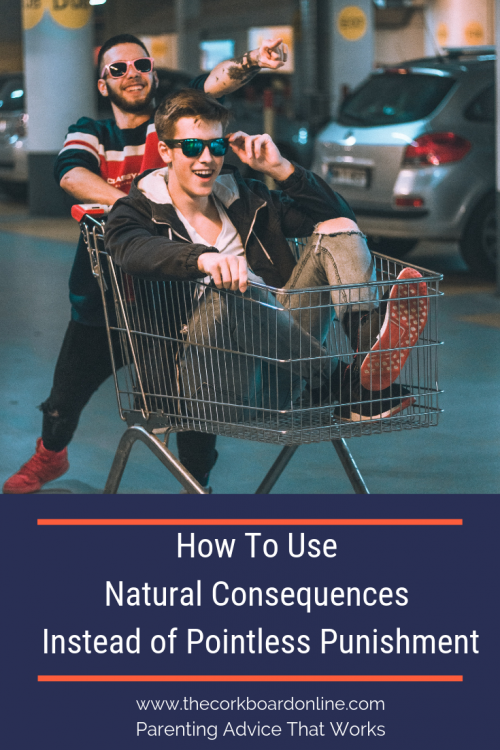 There are also what are often referred to as natural consequences. If you leave your iPod outside and it rains, it will get wet. It probably will also cease to function.

If my child has trouble with impulse control when playing with other children, he will not be allowed to play unsupervised with others.

Here are some things to consider when thinking about natural consequences with children from hard places:

The real magic happens when there is a balance of high structure and high nurture in how you respond to any situation. The structure may be letting the iPod get wet, and the nurture may be validating your child’s feelings of how much it sucks to experience the natural consequences of irresponsibility.

Lastly, I’ll just speak a few words to those who are still gagging. You may need to go put on big person panties first.

Why do you think you feel the need to punish? It is wrapped up in how you were raised or what a portion of society has told you about what it looks like to raise children “properly?”

How do YOU feel when your child misbehaves? Fear? Embarrassment? Is your need to fix your child’s behavior through punishment more about easing your feelings of discomfort when the misbehavior happens?

Is punishment even working for you? Is it helping your child move toward healing and making better independent choices? Is it causing you to expend any less energy in the long term?

I know. Tough questions. I know them well because they run through my internal dialogue every day. I feel the pull to punish when I have to address the same thing for the 140 millionth time, but I know that it’s more for me and my big feelings than an actual solution.